What got 'The WAR Z: The Survivor MMO' got to do with wrting

Warning: Unlike with any other blog post I write, with this one I will just let the words flow out without paying any mind to editing, spelling, and grammar, because how can one do different with  a mind full of excitement on the prospect of soon playing the WAR Z a zombie survival MMO. Hey, real digital life the walking dead will be happening in that game.

This is one game that I hope will come out after Christmas. Don't think that this means I don't want it out now, because I really do want it in my hands right now. I want to immerse myself in the game, playing many characters, many types of good guys, bad guys, and inbetween guys. I want my Otis to my Shane, to knee cap a poor bastard and see him chowed down by a horde of stinking zombies while I limp away all serious-like, and after I'm safely back at camp I'll lie through my teeth that he tripped and them damn walking dead got him good. Though I would only do so in a game. I'm not really horrible like that in real life. I would just run faster, because a guy chubby like Otis would have no chance keeping up with me and would eventually be eaten anyway. I wouldn't even have to lie, I would say the truth, he was slow and these damn stinking walking dead got him and ate him up good while I watched and smoked a cigarette. Yeah a man need to rest if he gets a chance while running away from zombies.

Anyway I'm deviating . I want this game out after Christmas because if it happens before that it will mess up the many things I got planned to do. With this game out early it will rob me of many hours that I should be spending instead on writing. This November I'll participate in Nanowrimo and plan to write a novel in one month time and have it publish (certainly after having it edited) on Amazon and Createspace before Christmas or on Christmas. It would be swell if my new monster baby gets born on the same date baby Jesus allegedly was born.

The story of course will be about zombies, well actually about a boy and a girl trying to survive the zombie apocalypse. I wanted to write a zombie novel for a while now, but so far I've only written zombie short stories. So yeah, I can't have the distraction of a zombie game or else I'll be reliving zombie life through the game instead of writing zombie. I already had great difficulty getting myself off the DayZ IV.

I'm already working on the cover design and tried my hand in creating a zombie cover, but I'm not there yet. So far I've made this one: 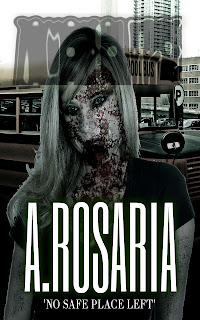 I'm really not satisfied with this cover. I want to make it a little bit more surreal than real... I'll see what I can do. I might look into and compare other book covers, maybe I'll get a better idea what to do to make a great zombie cover.

September I'll be publishing-for the first time-a print book, the experience in making that one will help me for when I have to do the same with my zombie novel. It looks easy formatting a book and making a cover for a print version, but it's not. Formatting an e-book is easy, a real paper one has a steeper learning curve, but by the time my novel is ready I'll have the knowledge to format a novel for print in less than four hours.

I will be busy these coming months and will have almost no time to game, it will be work, work, work, luckily I like writing so it won't be that bad.

*For those that managed to read through this dredge of text now understand why I hire an editor to clean up my mess. ;)