Reading Dean Wesley Smith's last post about print publishing short stories got me thinking and excited to do the same. I did already want to publish in print but only short story collections and novels, which I actually planned to do this November or early December, but now I think I'll do it sooner and for a single short story.

I'll be working this month in getting a print version out for 'F.C.F. That Within' it's my highest reviewed story and one that sold best out of the bunch I published second only to 'Gone World' that ironicly is one of my worst reviewed stories. :D.

It will be a learning curve to get it all formatted and to create the jacket for the book. So far I only finished the front cover. It took me hours to create and almost burned down my computer, it's the first time I worked in gimp with a file almost 300 MB in size. It was crazy, my old PC was complaining and stuttering like the old thing it actually was, but I succeeded, or it did succeed because I just clicked some buttons while the machine really did all the heavy lifting. 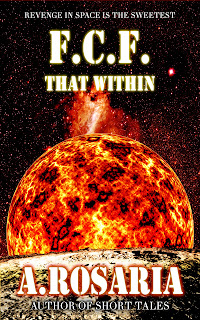 I might still change a few thing, but for now my machine needs its rest.