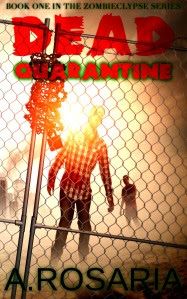 This e-book is a work of fiction. The names, characters, places, and incidents are products of the writer's imagination or have been used fictitiously and are not to be construed as real. Any resemblance to persons, living or dead, actual events, locales or organizations is entirely coincidental.

All rights are reserved. No part of this book may be used or reproduced in any manner whatsoever without written permission from the author.

Alex Rosaria is a writer, who loves writing horror and sci-fi stories, though when creativity demands it he likes to branch out to other genres. He‘s also the author of:

If you want to get an automatic email when Alex‘s next book is released, sign up here. Your email address will never be shared and you can unsubscribe at any time.

Word-of-mouth is crucial for any author to succeed. If you enjoyed the book, please consider leaving a review where you purchased it, or on Goodreads, even if it‘s only a line or two; it would make all the difference and would be very much appreciated.

Alex talks about writing and pretty much everthing on his blog A creation of a Novel. Alternatively, you can follow him on Twitter, or get in touch with him on Facebook.
Geplaatst door A.Rosaria op 10:32 PM