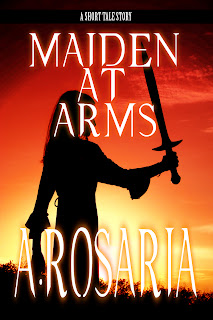 This e-book is a work of fiction. The names, characters, places, and incidents are products of the writer‘s imagination or have been used fictitiously and are not to be construed as real. Any resemblance to persons, living or dead, actual events, locales or organizations is entirely coincidental.
All rights are reserved. No part of this book may be used or reproduced in any manner whatsoever without written permission from the author.

Lyna‘s eyes fluttered open to what seemed to be the ceiling. She couldn‘t distinguish the lush design and artisan workmanship she so liked to wake up to any other day. With her vision blurred, she saw only smudges, dark smudges on the otherwise meticulously white ceiling. It didn‘t help that the only light came from a torch casting the room in a yellowish tint, with shades dancing over the walls with every breeze passing through the torch‘s flame. She must still be in bed, woken from the bad nightmare she had. She couldn‘t remember what it was; only that it had frightened her. She still felt clammy from the sweat and a certain numbness she ascribed to suddenly waking up.

She blinked to clear her vision. Lightheadedness befell her. Lyna squinted. A burning feeling started at her left cheek, a light throbbing pain. She brought her fingers to her cheek, lightly touching the skin with the tip of her fingers. Wet. Had she fallen? The pain she felt throbbing at her cheek increased, and she could now feel the hard stone beneath her. She lay on the ground, not the soft cushion of her bed.

Something dripped on her forehead. Cold. It was very unlikely water leaking from the ceiling–above was no roof just another of the many rooms in the castle. She opened her eyes; the ceiling swam above her. Lyna pulled up and immediately slammed back down, crying out in pain. She gritted her teeth and brought a trembling hand back to her cheek; this time she cupped it with the palm of her hand. Her cheek throbbed. She cried out and saw white for a moment. Her skin felt raw, torn, and each touch, no matter how light, was painful. Having had a protected life so far, she never felt this kind of pain, any pain really but for the occasional bumping of her knee.

Lyna looked up at the ceiling. The blurred smudges slowly turned into spatters of blood. The blood dripped down on her. So much blood, she thought. Claudette. Aaron. She turned her head to her right. She gasped. A pressure built in her chest that didn‘t allow her to breathe. Dazed, she stared at her little brother‘s severed head. His eyes were wide open, white with terror; any hint of life left in them was long gone. The edges around his neck were raw, torn. His head had been ripped off and not cut clean by a sword.

When Lyna finally breathed out, the air exploded out in a moan of anguish. What had happened rushed back to her in a flash. The demon had soared through the air, and with one swipe of her claws, she had severed Aaron‘s head. Claudette had charged the monster, a knife in her hand, screaming her brother‘s name. Lyna turned her head to her left. Her eldest sister lay crumbled and broken on the floor. It flashed in front of her, the demon had pierced Claudette‘s chest with her claw and tore her still-beating heart out. The demon had crushed it, the meat and blood seeping through her claw-like fingers. Next the demon had pulled the knife Claudette had managed to stab her with out of her chest. Demon blood had spurted Lyna‘s face and she couldn‘t help swallowing some.

Lyna remembered she had no time to gag or spit the blood out. The demon had bore down on her, swinging with her claws. Lyna had staggered back, but its nail had cut deep into her belly, slashing stripes of cloth and skin. Lyna had looked in disbelief at the demon. Her own sister, Christine. She had scratched Lyna‘s face. The nails had carved her cheeks open, and the force of the blow had knocked her down. Christine had stood over her, a twisted smile on her face, glaring down at Lyna.
She had kicked to get away from Christine, but all strength had left her body. Bleeding profusely, she could only watch, helplessly waiting for the last blow to end her life. It didn‘t come. Christine‘s face had fallen into a blank stare and she had started chanting instead. She had whispered words in Latin that Lyna didn‘t fully understand, but they had made her skin crawl in disgust. Just as sudden as Christine had started, she stopped. Soon after, Lyna had heard banging on the heavy oak door. Men barged in and escorted Christine out. Not one of them had noticed her bleeding on the floor or her brother and sister‘s dead and mutilated corpses. They walked inside as if Christina was the only one in the room. Lyna had called out for help, but they had ignored her as if she was long gone, dead for ages. She had screamed and kept screaming until she passed out.

It all came back to her. Now not only the pain burned, but also something else. It festered at her heart, spreading through her body and pushing back the pain. She crawled up and stood unsteady on her legs, her head dizzy. She gritted her teeth. With each awkward step she took, her body hurt. Under her breath, she swore revenge for the death of her sister and brother. With each sting of her cheek she knew more and more that life as she knew it was over. Eadric, the young knight she fancied, wouldn‘t want her now, damaged as she was. She had been doubly wronged by her sister; she had destroyed those she loved most and her future with the man she adored. At least she still had her father.

In her bloodied gown, she limped out of the room. Dirtied with blood, her long black hair fell over her shoulders. Her pale face stood ghastly out in the darkness. Her hollow eyes darted from side to side. Anyone who saw her would be alarmed, and help would come if not for that the arched hallway was dark and empty. Any sound she would normally expect was not there. She struggled through the hallway to the other side to her father‘s chambers. She didn‘t visit her father often. It was never a social call, nor would today be one. Today would be worse, much worse. She knocked. On the other side came no answer. Lyna cried out her father‘s name. She yelled for help. The tears burst out; she couldn‘t hold them back anymore. Her whole body trembled. Lyna dropped to the floor, clawing the door and hitting it with her fist. The tears kept coming.

She sat like this for a long time. No one came to help her. With some difficulty, biting the pain back, she got up. Every step she took, she felt her body drain of energy. She wanted to just collapse, to give up, and to have things be as they were. She wanted see her brother and sister‘s faces and Christine‘s. She pushed her feet to take another step until she saw light burning ahead. The wind carried many voices her way. She stood still, listening. She heard the distinct, heavy voice of her father. The weight of the black tidings she had to tell him burdened her. How was she to tell him how Christine, his own daughter, had slaughtered his other children, his favorites? By their own blood, they had died, she herself almost died. Her tears streamed. She wiped them away. With bloodshot eyes, she arrived at the arch and then continued to the castle‘s audience room.

Armored men, knights stood in front of her father, the lord of the castle, listening to the orders he barked at them. She saw that her Eadric stood among them, his chest puffed up, full of resolve. Her heart skipped a beat. She prayed to God that he would not turn his back on her, that he would help her through this ordeal. The knight he was surely would. Maybe he wouldn‘t be there in love, but as a friend instead. That was the least he would do. That thought made her feel as if a light lit within her, easing the burden of delivering the dark message she had. She walked toward her father‘s throne. The room hushed and all eyes drifted to her, most of all her father‘s. Grim faces stared at her.

Her father stretched a pointing finger at her. “Seize her.”

Get the short story at Amazon


If you want to get an automatic email when my next book is released, sign up here. Your email address will never be shared and you can unsubscribe at any time.