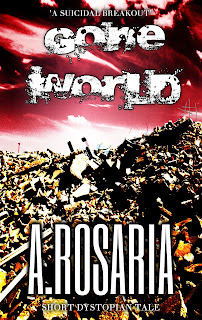 Copyright © 2012 by Alex Rosaria
This e-book is a work of fiction. The names, characters, places, and incidents are products of the writer's imagination or have been used fictitiously and are not to be construed as real. Any resemblance to persons, living or dead, actual events, locales or organizations is entirely coincidental.
All rights are reserved. No part of this book may be used or reproduced in any manner whatsoever without written permission from the author.

His name rang in his pounding head. His head hurt where the stone had hit him, or was it shrapnel? No, not shrapnel. He didn‘t smell the blood that it would cause.

A shove against his shoulder lulled his head sideways, igniting the pang to a new high. He squinted his closed eyes as if he could press out the pain.

“Get up. We need to move,” Tina said. It was indeed her, and somehow she had survived.

He opened his eyes to a bright light. Daylight already, he thought. As quickly the light blinded him it swept away, leaving him in darkness. Far away he heard the hum of an engine. They were searching for stragglers–him, Tina and whoever else had survived. Not that it mattered anymore.

“We need to move away from here fast,” Tina said.

“You think!” he said, coughing dust. It tasted bitter, dry, and surely not edible. Give it a few more weeks and it might. He spat the last bit out, leaving his throat dry and wanting water that he didn‘t have. If they didn‘t catch and kill him, the dust would; he had gotten enough in him to guarantee him cancer in a decade or two. He smiled. Although, the lack of water might get me first.
“Stop acting like a fool,” Tina said. “We have to leave now.”

He winked the darkness out of his eyes and saw her haggard, brown face swim into his vision with her big eyes too innocent looking to belong to her.

“Where are your buddy Arnoldo and that crazy, Ron?”

Her look soured. “He‘s not my buddy, and dead, both of them. We really can‘t stay.”

Tina‘s eyes darted around, while sweat mixed with blood ran down her face. It wasn‘t her blood. She had no scratches or other visible injuries. She had lucked out again; her luck had no end.

“Why run? Eventually they‘ll get us.”

Frantically she shook her head, her filthy hair slugging along with the motion, spattering blood in his face.

“Just leave me be. Really, what do you care if I live or die?”

Tina sighed, stood up, and kicked his side. “Fine,” she said with her teeth clenched. “Die then, asshole.”

That was the most emotion he had ever seen from her. However, she still was a bitch to kick him. It hurt like hell. The damn woman could kick with the best of them. She still stood there, not leaving. The hum of the engine drew closer. She had better move soon before the light comes sweeping in.

“What are you waiting for? Go. Don‘t wait around to die with me.”

She didn‘t answer. Instead, she stayed frozen, watching whatever she saw through the big hole in the wall.

“Asshole,” she hissed between her teeth. She ducked away, grabbing his hand and pulling him down with her. His knees banged on the rubble floor; it was a good thing he had on knee pads, or else he would be hurting now.

She punched him before he could finish and raised her index finger to her puckered lips. A beam of light passed over their heads. The vehicle stopped near their hiding place: three walls left standing, filled with bullet holes, covered by a sagging, charred roof. It had once been home to a family now long dead.

The floor trembled lightly along with the stationary vehicle. The heat emanating from the engine already reached them. It was the only comfort brought to them by this uninvited guest, who surely was bringing the gift of death.

The sound of boots hitting the ground was followed by the soldiers‘ voices. They were Russians, not Chinese, and there went their advantage of size. Nick wiped blood from his lips, glowering at Tina. He hoped she showed this sort of kindness to them. He unsheathed his trusty, rusty butcher knife and knelt next to her, who was brandishing her own knife. Hers was bigger than his.

Their eyes met, and the right side of her mouth shifted up in a smirk he would have loved to slap from her face. She tapped her right ear and raised three fingers. Fine hearing. He had only heard two. The sound of crushing stones under boots came from the side wall as someone tried to slip around the house. There was no hiding or fleeing anymore; the choice to action had been made for them.

Tina moved lithe on her feet, leaving him behind to stare at her wiggling rear. Great, he thought. She had left him with two to take care of. Way to go. If he had stayed down, his death would have come quick enough. He shook his head. That was not be the way he wanted to go; fighting suited him better. He watched her creep along the side wall, brushing her right shoulder against the stones. The sound was inaudible over the hum of the engine. Her combat knife was clutched in her left hand. She‘d manage by herself; it wasn‘t her first time, or his.

Nick gritted his teeth, hugged the wall, and slid towards the big gap made by a tank shell during the war. He waited for a rustle or grunt, and it came as if on cue, barely audible unless you specifically listened for it.

He rose up, ignoring his stiff, aching muscles and his throbbing headache. Already the feeling of pain was numbed by the rush of adrenaline coursing through his body. He climbed out of the hole and moved to the other side as if it was a common daily occurrence. It took him a second to take it all in. There was rubble everywhere and a sea of gray in the moonlight as if they were on said moon itself.
A Vodnik was parked about ten feet away; it was a Russian–made multipurpose vehicle with an open turret hatch, but instead of a machine gun, it had a powerful searchlight mounted on top. The light pointed away from the house and luckily was not manned. Two tall Russian soldiers in camouflaged fatigues and body armor stood with their backs turned to him, their rifles pointed at the ground.

He approached them quickly without bothering being silent. With long strides he was upon the tallest. He grabbed him by his hair, which the fool had allowed to grow. It was his doom and Nick‘s luck. He pulled the soldier‘s head back and pushed the point of his rusted, nicked, but sharp–enough knife into the jugular and out the other side. He forced the knife outward, tearing the front of the man‘s throat open. Choking on his own blood, the soldier collapsed.

The other soldier turned at the sound–a woman, although you would not think so at first sight if it wasn‘t for her chest pushing her armor slightly forward. Her lily–white face looked on in wonder. She had a nice, clean face, with blue, wide eyes, full lips, and a strand of hair loose on her forehead. She was a pretty girl, by all means, and very Russian.

Get the short story for free at Amazon


If you want to get an automatic email when Alex‘s next book is released, sign up here. Your email address will never be shared and you can unsubscribe at any time.
Geplaatst door A.Rosaria op 10:54 AM