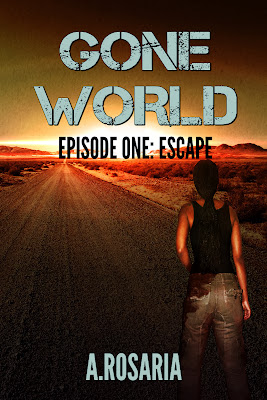 I recently got Gone World copy-edited and updated to address some concerns readers had. This is an improved version and free at Smashwords/Kobo/Amazon.

The United States of America—along with most of the world—has been left in rubble. Pockets of resistance fighters are still fighting the good fight against the invaders, the Sino-Russian Alliance.

Nick and Tina, two rebels, have narrowly escaped an ambush, but Russians still surround them. With the rebel city destroyed and cordoned off by thick walls, their chances to get out alive are slim to none.

To be the first to hear about new releases, sign up for the newsletter.
Geplaatst door A.Rosaria op 11:23 PM