Dead Quarantine my zombie apocalypse survival horror novel just got published on Amazon.com. Before I wrote Dead Quarantine I wrote two other novel length horror stories which I didn't publish because they were not good enough. They need a major rewrite and maybe I need to fuse them together into one novel before I even think about publishing them. Maybe this will be my New Year's resolution.

Back to Dead Quarantine; I wrote the story during Nanowrimo, the first draft I finished in two weeks, writing about ten hours daily. Then I went over the work for two more weeks and send it out to my editor. Thanks to her the story is polished to a publishable level. She is great at what she does besides also being nice and helpful. I really can't thank her enough for her work. Thank you Dani.

Dead Quarantine is a fast paced story about two teenagers fighting their way to safety through a zombie apocalypse. It's the first book in a trilogy. The other two I got roughly outlined and I'll start writing the second one in early 2013 and the third one during the 2013 Nanowrimo. I also still got some short stories and novellas to finish and some other projects I'm writing under a pen name. I'll do my best finishing them all by the end of 2013. 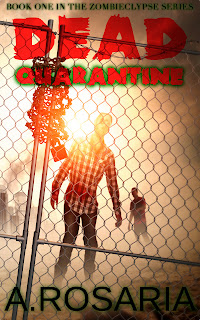 Unbeknownst to two teenagers—Ralph worried about a history exam he didn't study for and Sarah having studied all weekend—a flu pandemic with apocalyptic proportions rages over the world. On Monday, they arrive at their high school besieged by men in hazmat suits, escorting infected teenagers to buses. Ralph is forced on one of these quarantine buses and Sarah, along with the remaining healthy student body, gets quarantined at school.

This flu however is worse than the 1918 Spanish Flu that killed a hundred million people—much worse. This flu turns its victims into the walking dead. The few not infected are left not only with the grief of their family and friends passing, but also with the horror of their families, friends, and neighbors trying to rip the flesh off them.

Ralph—unsure about the real destination of the bus and trapped inside with kids that are getting worse by the minute—may not get to the destination in time before the first one dies. Sarah, trapped at school, deals with a worsening situation that she soon needs to escape from.

Will the zombies feast on their young flesh or will they escape?

Available at Kobo and Smashwords in January 2013.

I will also be making it available in print (Createspace), at earliest at the end of January but most likely in February.