What does skateboarding have to do with writing?

What does skateboarding got to do with writing? You would think not much, but yesterday I learned that it has somethings in common with writing. I tend to do things, to my wife's dismay, most people my age would not think to do. Sometimes I am just so focused on doing something, that I forget (more I do not care) what people might think or not think. 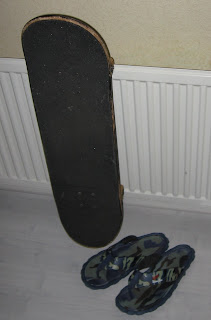 Yesterday we had our daughters eight year birthday party, my house was crazy full with kids a total of eight including my own, to me it seemed like thirty kids. After the kids went on to their home leaving us tired and spend (babysitting is a hard job), family showed up.

First to arrive was a young nephew of my wife, he brought a skateboard with him. My daughter immediately wanted to try it out, outside he showed her how to skateboard, but after a while they started playing tag. A skater boy running after my kids leaving his skateboard unguarded.

Too tired to join in on the tag game, I stared at the skate board. It compelled me to come an try it out. I thought about my old bones and muscles, breaking and tearing leaving me a mess of a man. I though to be too damn old for this sheet. Having difficulty listening to reason, even my own, I gave in to the skateboard's compelling call.

I stood on it and I was happy, I did not fall. I wiggled a bit on it, still not falling. I though, hey lets try it like that wave board I saw on television, that did obviously not work, still I did not fall down and break something. So i tried instead of moving side ways to push forward standing on the skate board. I went forward a little and still standing, my ego grew a bit I thought it could not be so hard.

Remembering the instructions my daughter previously got I tried them out. One foot on board and step with the other, that did not go that well, few times the skateboard went forward or backwards while I stayed behind other times the reverse happened. Have to say may ego got put back in check.

Not giving up easily once started, I kept at it and lo and behold I managed to step and mount that board and keep standing. Next I tried two consecutive steps and after trying and once falling I succeeded at that. Soon enough I could skateboard a bit up and down. I showed my wife my technique, she smiled and cheered amazed at my skill or craziness or both.

Now back to the question, what does skateboarding have to do with writing. To me it means you should be willing to try new thing no matter how weird or different it may seem to you or others and as in almost everything to be able to do something you need to keep trying and not giving up till you succeed.

No one will be able to do anything unless one tries and keep at it, not even a genius. The more you practice the easier it will get. One should with all things in life, look for the next step in learning so to improve instead of stagnate on current knowledge. Never take granted what you have learned.
Geplaatst door A.Rosaria op 3:06 AM