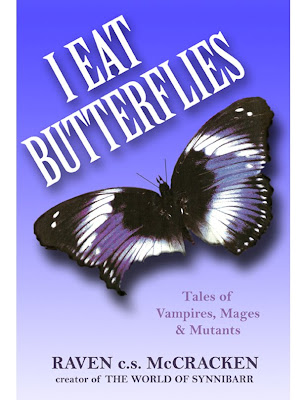 The book's description as found on smashwords:

THE BRIDES: The Brides of Dracula have always been secretly calling the shots by making Draculii as fall guys. What happens when you create the wrong dark prince?

MERLIN’S KNOT: Upon discovering the secret code interlaced within the Celtic knots, a group of college students learn how to use real magic, and the knowledge propels them into a world of intrigue and adventure.

VELOCITY SYNDROME: An Orwellian take on the near future, where there are groups of low-powered mutants, humans have chips in their brains, and the world is drowning. And the answer to one murder may save the world or lead to total destruction

The stories in themselves are okay to good: Velocity Syndrome being the better one. While reading I had the feeling that the author was new at the craft of writing. This was evident from his overuse of "purple" prose, so much it distracted me from reading his story, which is a pity. Luckily he improved. In his third short story "Velocity Syndrome" he writes much more fluent and readable. Because of that I could immerse myself better in the third story than the previous two.

The brides was a drag to read. The story is an interesting one. It's a new way (for me at least) describing vampires. However the writing was distracting, and this made reading it less enjoyable. For example in the story the brides talking amongst themselves about the past, one retells the story how they started. A flashback by retelling. It's nice getting some back-story, but it's weird and awkward way of doing it. Why would one of the three people, who have lived and experienced the event, retell this to the other two who lived it along with her? It's made it too obvious it being a flashback, and this can distract readers.

The story picked up when the brides found a new prince. The writing started to flow better at the end. This made it more a pity, that while improving in his writing style, the story suffered a little fall. It felt chunks were left out, and stuff started happening ad hoc. The ending was a little abrupt and left things not so clear. It felt it rushed by leaving me to ask my self; "What happened!"

MERLIN’S KNOT is less flowerly written. The story follows a clearer path than The Brides. It has an interesting take on magic and technology. Too bad the story gets convoluted by having too much going on at once. I'm sure some will like that. To me it has an B action movie feel to it. There are things added to the story that I felt were not there to add to the story(because it didn't make sense), but for the cool factor. However the writer is improving in his craft. Merlin's knot is less a drag to read.

Velocity Syndrome is more coherent and read fluent compared to the first two, it is less distracting written. I enjoyed reading this one. The setting is great and the story draws you in. At the end it has a twist, only too bad it is a tad confusing.

From reading "I Eat Butterflies: Tales of Vampires, Mages & Mutants" I have come to believe Raven c.s. McCracken has an imaginative mind and that he shows he improves with every word written. If he keeps writing I'm sure he'll come to a point he'll be writing great stories. These being his first, they are however not so great, but still worth reading.