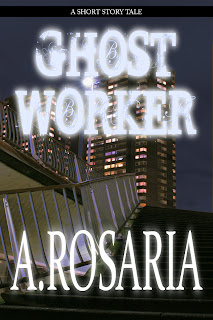 Ghost Worker is available on Amazon, KOBO, and Smashwords for $2.99. Till 26 of July it will be free at Smashwords. Use the code SSWIN at checkout to get this book for FREE.

Brian is a happily married man, working a mundane job as a paper pusher. This changes after he's kicked out of his home after a heated argument with his wife. Left with unanswered questions, he wants to confront his co-worker Tom about his alleged dealings with his wife. However, it may not be as easy as Brian would like: everybody at the office claims to have seen him, but it has been weeks Brian saw him last.

In his search to solve the mystery of Tom's absence and finding answers to his questions, Brian stumbles on more trouble than he expected; a job deadline, a weird intern, and an unexpected turn of events.

Will he ever get the closure he seeks? Or is his destiny set in doom?

In its aftermath the world has been left in rubble, with pocket of resistance fighters still fighting the good fight against the invaders, the Sino-Russian Alliance.

Nick and Tina, two rebels, just having escaped an ambush, need to find a way to escape the area cordoned of by the invaders. Will they get out? Will Nick and Tina, manage to do deal with the hopelessness of it all, surviving in a gone world?