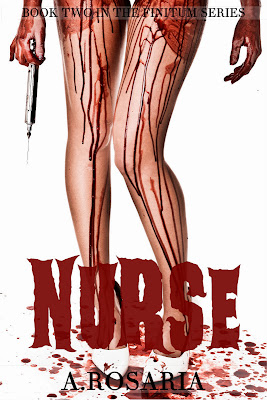 Copyright © 2013 by Alex Rosaria
This e-book is a work of fiction. The names, characters, places, and incidents are products of the writer's imagination or have been used fictitiously and are not to be construed as real. Any resemblance to persons, living or dead, actual events, locales or organizations is entirely coincidental.
All rights are reserved. No part of this book may be used or reproduced in any manner whatsoever without written permission from the author.

“Lucretia!”
The old hag, old only in age, looked at her reflection in a mirror. The frame was of nice smooth polished human bones, with carved quartz and gemstones inlayed.
“Lucretia!”
The stones emitted a yellow-orange glow. She admired her reflection: her smooth, pale skin, her narrow nose, her almost black eyes, and her thick, long black hair shining with health. Above all, she cherished her youthful, yet still mature, appearance. A youth not her own, nor hers alone. She may look in her late twenties, but her real age spanned many lifetimes. She smiled, barring her teeth, which were pointier than most.
“Lucretia!”
Sound came from the mirror. Her reflection blurred and transformed into another face, the face of a younger woman in both appearance and age. Like herself, she had pale skin, long black hair, and dark eyes.
“High Sorceress, you called?”
“How are the preparations going?”
“We have all the ingredients for the spell. The old one is on her way; the succubi are with her. The church is ready for us, and I turned the priest.”
“Turned?”
A vile, animalistic smile formed on Lucretia‘s face. “Yes, he is wild now.” She licked her black lips while her eyes burned a steamy fire. “I like them wild.”
The High Sorceress frowned. “Enough, child!”
Lucretia‘s face turned stoic like that of an old Greek goddess, long dead. “My apologies, High Sorceress.”
“And?”
“High Sorceress?”
“Is that all you have to report?”
Lucretia‘s eyes widened for a split second. “Yes.”
“What about the sacrifice!”
“Oh, her.”
“Yes, her!”
“She wanted to explore the town and experience life.”
“What! She will experience life enough through me. Why did you not stop her?”
Lucretia cast her eyes down and kept silent.
“Bah, of course you couldn‘t. She is more powerful than you ever will be.”
Lucretia nodded. “Yes, she made that clear to me.”
“So you tried and failed. Good girl. At least you have that going for you.”
The High Sorceress laughed. Lucretia lips thinned to a stripe in response. “We will get her back.”
“No! Never mind her. She knows her place. She will return in time.”
“Are you sure of that? She is unpredictable.”
“Are you telling me that I am wrong?”
The High Sorceress stretched her arm, finger pointed at the image of Lucretia. Lucretia‘s pupils widened. She fervently shook her head. The sorceress mumbled ancient words, vile, dark, not-to-be-spoken words. They filled the room with their resonance; black energy came free all around them. Lucretia grabbed her throat. Her mouth opened and closed like a fish out of water. Air wouldn‘t come in despite her effort to breathe.
The High Sorceress balled her hands into fist. Lucretia wheezed. Slowly, the High Sorceress released her fist. Air poured again in through Lucretia‘s throat to her lungs. For a minute longer, she breathed heavy before she collected herself and bowed her head. “I was wrong to doubt you, my High Sorceress. Please forgive me. I‘ll never do it again.”
“You better not, and let this be a lesson to you. I am never wrong.”
“Yes, mistress.”
“We command you to be gone now.”
The sorceress waved her hands, and again she could admire her fleeting beauty.
The time had come for a renewal, however inconvenient the timing. It would be worth it, because this time the sacrifice would do for eons to come while most only lasted a few decades. It was difficult to fathom such a source of power existed in one being, one who, in time, could equal the power they had together as many.
With the sacrifice, her power may become supreme, enough to vanquish an undead with the ease of kicking a puppy to death. She had one particular undead in mind, one who she would love to use this power on once she gained it. It would send a warning to the others, that there was a new superior force in the world to contend with, and maybe she‘d become the supreme being. They would see; they all would soon see, and not long after, the world would be covered in darkness and those now living in light would see.

***
Lucretia stared at the wall where the image of the one of many appeared moments before. She massaged her throat; it still felt sore. She closed her eyes and projected in her mind the power of nature.
“Oh, nature, listen to me, grant me your power to heal against those who wronged me. Goddesses, aid me in my need, no matter how undeserving I am, for nature is the power to heal all, even those like me.”
Her hands buzzed with energy. It soothed her throat, and the burning sensation subsided though the pain lingered. The power of nature, or better, her command of it, wasn‘t enough to counteract the dark power inflicted on her. It didn‘t help either that she was a creature of the night, though a long time ago things were different. A look of longing passed over her face. She tore herself away from the thoughts forming about a life long gone, one she couldn‘t possibly ever return to, bound as she was to this fate she carved out for herself. She sighed. Today had been the second time she had to heal herself. Because of what she was–and also the reason her fate was tarnished–she could regenerate, but that would take time she didn‘t have.
“Me and my mouth. One day it will be the end of me.”
She stood in the church, facing the cross and Jesus Christ nailed on it. His eyes fixed on her countenance. She slipped out of her black dress. Defiantly, she pushed her chest forward, her breasts dangling together with her perky, dark nipples. “You liked it, didn‘t you?”
Her laugh howled an echo in the near-empty church. “I did your priest on your altar, and did you help him? Did you smite me down with your righteous wrath?”
Moving swiftly like a breeze in the evening, she approached the altar and caressed the top. She closed her eyes and channeled her powers. With the sharp nail of her middle finger, she scratched her left breast. Blood dripped on her finger. The air around her filled with a magnetic charge. She stretched both arms out toward the statue, her palms facing forward. She mumbled words, dark words not fit for this world. The statue crumbled. She closed her hands into a fist and howled. Jesus exploded into a cloud of dust and clay, and fell broken on the floor. She twisted her left hand. The big cross turned upside down, and she rested it on the floor. Sweat ran down her naked body while she breathed heavily between laughs.
She felt relieved over the work she had done, the tension gone from her. She wobbled to the door on the left. “Priest!”
A growling from behind the door greeted her. “It‘s time for service.”


If you want to get an automatic email when my next book is released, sign up here. Your email address will never be shared and you can unsubscribe at any time.